New Paper on the IBM-HCL Deal 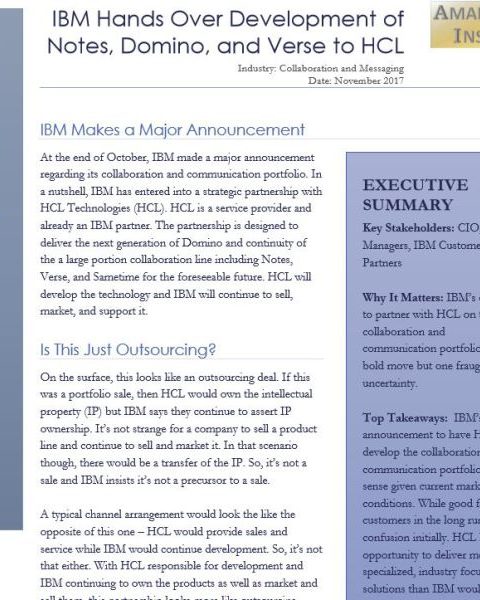 I have a new paper on the Amalgam Insights site. Called, “Market Milestone: IBM Hands Over Development of Notes, Domino, and Verse to HCL”, it examines the new IBM-HCL deal for developing parts of the IBM collaboration platform, especially Domino, SameTime, Notes, and Verse. In the paper, I provide some context and analysis. It’s free so go have a look.

Dropbox Paper, currently in Beta, is the latest product from online collaboration company, Dropbox. Based on their Hackpad acquisition and formerly called Notes, Paper is entering into the crowded fields of collaborative writing applications. Its competitors include Evernote, Box Notes, Quip, and even Google Docs and Microsoft OneNote and Word. Paper follows the model of Evernote and Box Notes more closely in that it presents a minimal and clean interface with fewer formatting and organizational capabilities than word processors such as Google Docs or Microsoft Word.

Like Evernote and Box Notes, Paper is best used for writing quick documents and sharing them. There are a small amount of formatting capabilities as well as the ability to include pictures and attach files. The theory is that it is easier for teams to communicate ideas by not getting caught up in the writing and instead dropping in content that is relevant and sharing it. Paper certainly follows this philosophy closely by providing an easy to use interface (primarily because there isn’t much there) and a commenting capability similar to Microsoft Office Online’s.

Unfortunately, the usefulness of Paper is hindered by a number of missing features. Even for a Beta product these are glaring omissions.

More than anything, it’s not clear why we need Paper or why Dropbox would put so much effort and money into it. If the point is to have a note taking and sharing application for Dropbox fanatics, then why aren’t Paper notes kept with other Dropbox files? If it’s a new way to collaborate and work, then why is it so similar to Box Notes and Evernote? Is it minimalism for the sake of minimalism? It can’t compete for collaborative content creation with Quip, Google Docs, or Microsoft Word. Paper doesn’t support semi-structured note taking like Microsoft OneNote (a key function for projects) or easy web clipping like Evernote. It doesn’t even sync notes to the desktop like… well, everyone else.

Paper is too little too late or misconceived form the start. It’s the kind of minimalist application that a handful of team members might start using but quickly outgrow. Dropbox is launching it into a crowded field of well-established players including Box, Google, and Microsoft. The worst part of Paper is that it is removed from Dropbox proper which will surely irritate the Dropbox aficionados. Simple put: It is not clear why someone would use Paper when there are so many better choices already available. Maybe version two will be better.