Why is The Internet Losing Their Minds Over MS Paint

July 25, 2017 Change, digital culture, Microsoft, Software vendors Comments Off on Why is The Internet Losing Their Minds Over MS Paint 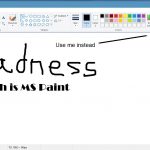 Yesterday, July 24, 2017, Microsoft announced that it would be deprecating MS Paint for the Fall Creators Release of Windows 10. Immediately the Internet went crazy with grief. There were even petitions! The reaction to the rather nonchalant announcement that MS Paint would no longer be part of Windows was so strong that Microsoft had to announce today that Paint wasn’t going away at all. Instead, MS Paint would still be available from the Windows Store, though it would no longer ship with Windows 10.

MS Paint has been around over 30 years. That’s four centuries in computer time. It hasn’t changed much in that time and is, let’s be honest, a pretty feeble program by modern standards. This is like weeping for the demise of the Ford Model T.

There are so many other simple drawing applications out there I can’t even count them all. Paint.net is better. GIMP is a hundred times better, free, and runs on everything shy of an MVS mainframe. Ask you grandpas about that one kiddies. Microsoft has also recently released an updated version called, unimaginatively, Paint 3D.

So why all the Sturm und Drang and gnashing of teeth? Nostalgia. That’s the only viable explanation. What else could it be? It’s like retro computing. No one really yearns for the days of DOS commands or thinks that a 25 year old Mac is better than a modern one. Yet, hobbyists fill their basements with ancient computers. MS Paint was, for many, the first graphics program they ever used, perhaps even one of the first programs they used. It’s not about the utility of a 30 year old piece of software; it’s about retaining a small piece of youth.

Give it up campers. If you want to regain the wonder of youth, listen to U2 or get a NES Classic. Crying for MS Paint is like trying to fit into that concert t-shirt from freshman year in college – a guarantee of embarrassment and sadness.

It might have helped if Paint 3D wasn’t, in of itself, kind of boring. Even so, embrace the new. Besides Paint 3D, Microsoft has also made Fresh Paint available from the Windows Store. Those are just the Microsoft offerings. The Windows Store and Internet are overflowing with low-end graphics programs. Use one of those.

But please, stop whining over an application from the Reagan era that should have been put down long ago.