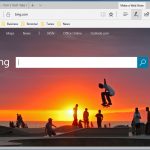 For the past week I’ve been trying to use Microsoft Edge almost exclusively. Despite it’s charms, I simply can’t. The inability to automatically open new links in a new tab is irritating. I end up opening a new tab and then loading the bookmark I want or having to middle click on a link.

On top of that, the bookmark import from FireFox didn’t bring over all of my bookmarks. It’s not like it refused to bring over any – it just didn’t bring them all over. For example, a folder with ten bookmarks in Firefox might only yield four entries in Edge. That’s both weird and annoying.

So, at the moment, Edge is my go-to for incidental Internet browsing but FireFox for my morning news reading and similar structured Internet use.

Or as Santa says in Rudolph the Red Nose Reindeer “What a pity. He had a nice takeoff, too.”